The trick is to care about everyone while not caring about what they think. 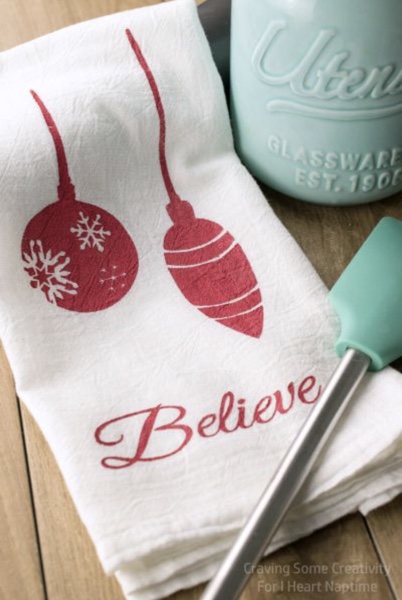 I remember back to a holiday when a neighbor gifted me a Christmas towel. It came attached with a poem called “The Christmas towel.” Something so simply, yet so profound and meaningful. In all honesty, I don’t think I ever truly captured it’s meaning and value until recently. All of a sudden it strikes a different chord and stirs something that sinks deeply within the heart to be cherished and held onto for all eternity.

Years later, I hope to pick a beautiful towel, perhaps the next time while shopping, wrap it up beautifully and write the poem on festive paper. Years later I feel the need to pay it forward to someone in the hopes of spreading a little Christmas spirit. Have you heard of the poem and this tradition before? If you have I’d love to hear your experiences with it, and if not…well I’d like to hear your thoughts anyways. Here is the poem.

At first glance, it is easy to look at a towel as a most ordinary object. Have you ever stopped to think that for thousands of years, the towel has been used for many wonderful purposes? For example, the mother who wipes the tears of a child, the physician who binds the wounds of a patient, or the woman in her home wiping her hands as she moves from task to task.

Perhaps the most significant use of the towel happened nearly two thousand years ago when our Savior, only hours before He hung on the cross, took an ordinary towel in His loving hands and dried the feet of His disciples. This simple, loving act personifies the selflessness and loving service we seek to give during our lives. It illustrates that an ordinary thing like a towel, in the right hands, and with a giving heart, can lighten another’s load. As with every action performed by the Savior on this earth, His act of service reminds us that simple day to day kindnesses are the Savior’s way to bless and comfort.

This towel is given with love and with the hope you will do works of goodness with it as the Savior did so many years ago. May the absorbing spirit of the season blot out our problems, soak up our sorrows, wipe away difficulties, and may your Christmas be shining and bright!

You can sound confident an have anxiety. You can look healthy but feel like shit. You can look happy and be miserable inside. You can be good looking and feel ugly.

So BE KIND, because every person is fighting a battle you know nothing about.

Thursday night was worse then any other night prior. I hardly slept and didn’t know how to make it through. It was taking it’s toll and wearing me down at rapid speeds. The regular dose of 400 mg ibuprofen wasn’t working for days, and yet I hoped it could lessen the blow and take the edge of enough to get closer to a more tolerable level. It didn’t, and I winced, screamed and cried all night. I was waiting for my soul sister to send me some healing and I was so ready to perceive it wholeheartedly and gratefully. I knew that there were a few people that worried a great deal about me, and I began to worry myself.

Dawn was finally breaking and the first streaks of light were greeting the day. I got up, knowing damned well that it would take me hours to get going before I could be on my way to see the doctor.

Somehow I managed to make coffee with my swollen and shaky hands. The skin was smooth and tight, with a sheen from every little wrinkle that was now gone and disappeared. It was easy to see how stretched my skin was, and the shaking was a clear sign of inflammation and distress. I was in pain and I was beyond miserable. The hours ticked by and I had until noon to make it to the doctor. I wanted to be there by 10 AM, and really it came down to a matter of the sooner, the better. Everything was so much effort. Pulling my pants up, brushing my hair, Life had truly become a challenge, and I couldn’t perform the simplest of things. Finally I was sitting in the waiting room, with no insurance and in dire straits. I waited for two hours until all appointments and other walk ins were helped. During that time, I had too much time on my hands to think, feeling like a social case, or on welfare, not that anything is wrong with that, and I’m sure most of us have fallen on hard times a time or two, it was just my first and I felt helpless and vulnerable. It was another lesson to be learned and to be appreciated. Just the day before visiting Mom, her doctor came to readjust her glucose medicine. A nurse saw my swollen hands and asked me how I injured myself. I told her that I have rheumatoid arthritis and that I am in a lot of pain. She understandingly nodded towards me and then turned to Moms doctor. I could hear the unspoken question from her hoping that he, the doctor would have some advice for me. But he wasn’t interested at all, he quickly glanced over at my hands and turned to precede what he was doing as if nothing happened. The subject died right then, and I knew I would be on my own. Did I really expect anything from him? I’m not sure and all I know is that I was starting to get scared. I knew this flare up wouldn’t go away by itself, I knew that I needed help and I just had hit my first strike out.

One day later at noon I was called into the examining room at the doctor Angie arranged for me to see. I initially talked to the doctors wife who also works in the Praxis. I’ve known her from when I was sixteen, and we used to live in the same house at one point but lost contact over the years. Crazy how much time had passed since then. She reached out to shake my hand and I begged her not to squeeze too hard. Her attention fell onto my swollen limb, and her frightened and concerned look said it all. It was an emergency and a much different reaction as the one from Moms doctor the day before. Shortly afterwards blood was taken and several tests were ordered to see what’s going on in the body. I got a shot for my rheumatoid Arthritis that seemed to work immediately. The tightness in my hands eased or at least the throbbing became more tolerable and didn’t get worse. I received instructions on how to change my diet and how to cut out foods that cause inflammation. We talked about Mom and what it’s been like for the past six month. The question came up on how I was coping with everything and what my support system was. At the end it was suggested to get another shot for my psyche to help me get a little distance to all of it. Basically to give me a break. I was indeed in need of a break. Perhaps it was due to fighting back the tears throughout the consultation that made me appear as vulnerable and worn. I was so overcome from the kindness that was bestowed onto me, to be told not to worry about a thing, to enjoy the beautiful weather this weekend and to get better, without anything in return that was taking me off guard. For someone to help and look beyond the dollar signs, with a desire of wanting to help because they once took an oath to help anyone in need, brought me to my knees. I had no idea this still existed and it felt dreamlike. A beautiful dream about how mankind used to be before greed took over. Was this really happening? I left with tears in my eyes, walking down the hallway, unable to turn around to show my ugly crying face. I would be back on Tuesday to go over the blood work and I knew that I wasn’t out of the woods by any means. Yet I felt so much better. My symptoms improved throughout the day and by the evening I was fully functioning. I was even looking forward going to bed that night, and catching up on the sleep I didn’t find in recent nights. I was laying on my bed, looking at the fairies dancing in the solar lights on my windowsill. It was silent and I felt good. For the first time I wasn’t flinching in pain, my heart was rhythmic and slow and the blood pressure of 150-100 from earlier that day seemed to have found a much calmer pace. I cried so many times throughout that day, overcome by emotion, part relief, and partly because of the kindness and help that I’d received. The care and sincerity, the genuine desire to help was truly godsend and came at a time when I had nothing left. Not a minute to soon, but almost a minute too late.

And just like that…life was good again and a miracle happened. I felt motivated and I had gained a new outlook on life. Another chance to get it right, to make healthier choices, to shape up again, to be the best version possible and I hope this would last for a very long time. It’s always easy to stay positive and motivated when the pain is at bay. It’s another when you are in pain.