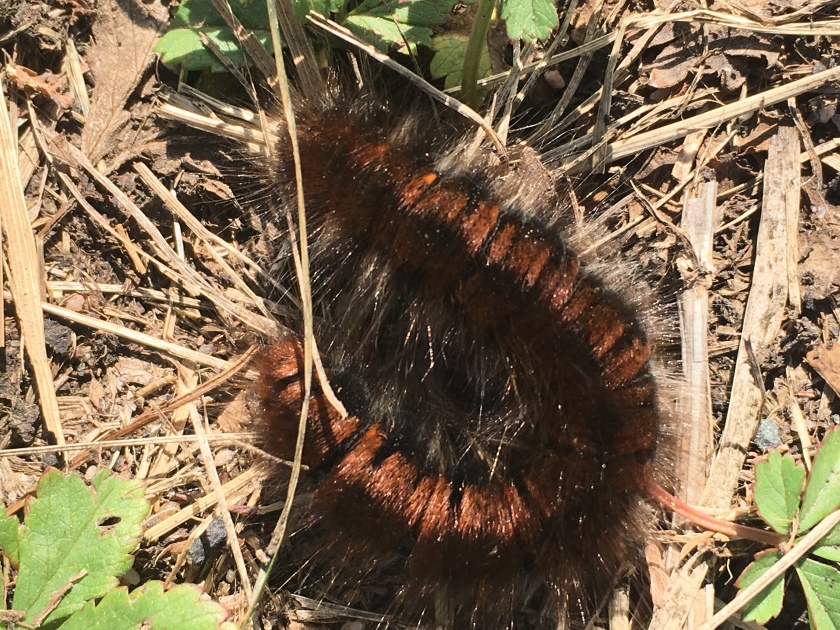 “Caterpillar holds the grand dream of becoming all that it can be, with no limitations, it reaches out to become it’s greatest expression of self. Putting everything aside, it follows the drive to evolve. Caterpillar teaches us to do the same, to find our power to transform in deep meditation, to go into the cocoon and emerge as a greater aspect of self…believing in the possibilities that with faith all things great and small are possible, and to remember that the grand and beautiful things have very humble beginnings”.

I moved on and left Mrs. Caterpillar behind. So far there had been the A-ha realizations from the neighbors speeding car that left me behind in a cloud of dust, there was wisdom to have more fun from the playful squirrel, and a reminder of transformation from the fuzzy caterpillar. I contemplated each while my steps carried me closer towards Mom. A smile graced my fave and sometimes I surprised myself of how aware I’d become. There was always a reason for everything, a meaning waiting to be found behind the actual occurrences. Nothing ever happened by accident, just like it didn’t with the people that crossed my path. I believed that each one was here to teach us a lessons, some good and some bad, if we were lucky enough, some touched our hearts and would stay in our lives forever. Those would become the special souls that we connect with, our soul sisters and brothers, the ones we feel a special bond with through the universe. The old friends, people our soul knew from a thousand years ago, and the people we so easily feel drawn to. I always knew that I was blessed for having encountered such special souls. The signs from that day were pertinent to timing, the exact moment as to why those particular encounters occurred. They were meant for me, and a message was waiting that I needed right then and there. I evaluated each incident, how it fit into my life, what meaning they brought, what needed to be reinforced, and what needed to be changed.

Nearly half way down the narrow bike path, a bicycle past me from behind, bringing me back to the current moment. I had waited for that moment and it was a long time coming. I knew it would happen soon or later as I periodically turned around, to avoid a scary and unexpected surprise during my stumble. I couldn’t ignore that my feet didn’t feel all that great anymore. It was too early for that, but my legs were burning and my fingers were so swollen that I can only describe them as thick white sausages threatening to burst open. Perhaps like the Michelin Man, that thick. It was getting very painful and uncomfortable, but I had to push on. I staggered at times, feeling myself swagger and sway all over the place. It was surreal, as if observing an outer body experience of myself. Surely I must have looked anything but graceful, but I didn’t care if anyone noticed. I drugged along, like a Pilger dying of thirst. Each step was becoming a fight, but also carried me closer.

I took a few picture along the way, to stop and admire, to live in the moment. At the same time it was giving me and my muscles a brief moment to relax. The burning never subsided and would continue all the way to Mom’s. The flight of stairs up to her room was torture by now, and then I finally made it. With a big sigh, all I could do is let myself fall into the chair, much to Moms surprise waiting for me to greet her as usual with a hug and a kiss. Any bystander might have thought that I just walked a 1000 Miles, but in reality it was only an hour and rather embarrassing. Another painful A-ha moment about my current condition set in. Dreams would remain dreams no matter how much I’d want to turn them into reality if I wasn’t going to get my health back. It was a hard bit to swallow, but hope and believe, faith and love were still present and flowing through my veins.

I stayed all afternoon with Mom and was thinking of the way back. It was getting late and I would have to leave and get moving soon, if I was to make it by dark. It didn’t take much convincing after Mom suggested to take the train home. The station was close by and would bring me closer to home into another neighboring village. It would roughly shave off one mile of walking distance and still give me the exercise I was seeking. No pain, no gain was the name of the game that unfolded all day. I wasn’t ready to accept defeat and the warrior in me was still in fighting mode.

The train was right on time and only a few short minutes later, I was walking once more. I had barely time enough to get my phone out of my pack to might snap a few more pictures. A hot air ballon was hovering over the forest ridge, lit up in a magical glow. The sun was about to set and the golden hour made way to the chill that filled the evening air. How much colder it was already getting at night, and tonight the temps would be just shy of freezing. After eating, I felt so cold that I decided to go to bed. I’m sure it was from the exhaustion and pushing through the pain, that I felt weak and worn. One step at a time I finished the day at 10078 steps and with the desired step goal.