Just recently I had the pleasure to learn about trail magic and I will go into detail of this came about in a later post. The subject deserves a post all of its own, and I don’t want to distract from a special message. Anyways, trail magic is a term used amongst thru hikers, especially long distance hikers. Trail magic could happen if a Good Samaritan leaves a meal behind for these hikers, maybe it could entail clothing, shelters and whatever else useful to somebody who has been out on the trail for weeks, even months. These simple things can become valuable as gold once stripped from the conveniences of every day comfort.That was the first part that inspired this post about trail magic.

The second part came from my love of travel and it has become tradition to take a few days off in October before the holiday madness would choke the life right out of me. For the first time ever, this would not be possible this year, and this alone could have been enough to send me into a depressive state. Literally. Ok maybe not this serious but my adventure time is very important to me and as an empath I recharge in nature. I don’t compromise on it easily and I don’t take it for granted. Beyond my limits this year, October would have to move to January and it would be the earliest time I could request time off. Ugggghhhh is it January yet?

I recalled a camping trip along highway 1 and the Californian coastline. And yes, I had deliberately begun to torture myself. Why even think about it, it wasn’t in the cards this year, and it was clear that all of what was in my immediate future, was work. This ocean adventure ended up with a trip to Disneyland, the happiest place on earth, where magic happens every day. And then it hit me and I thought of something that made me smile big, bigger and yes even bigger. Just like Disneyland, the trail had always been a magical place for me. I decided to bring a little trail magic of my own. No I wasn’t going to leave food, as most thru hikers would have completed their adventures already before winter was sweeping over the land, and no I wasn’t going to leave a blanket or some clothing behind. I had something other in mind that would require me to be a part of the magic. 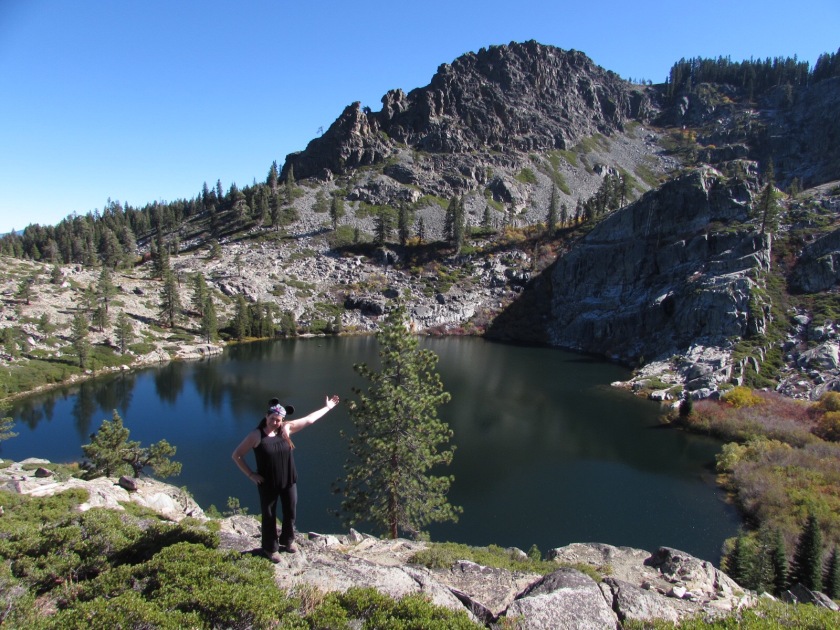 The day started around 9Am, kind of late as the days are so short already, but there is something so nice and relaxing to ease into your day off with a cup of coffee and no rush. Our journey took us north towards Lassen volcanic park which is an amazing place all by itself, but the final destination would take us off course to a different location. It was gloomy with patches of low hanging clouds until we reached what looked like a cloud roll that spread for miles across the ground. It seemed as if it had jumped out of the sky to take a little break and rest while kicking back on the farm fields. It was unusual to say the least and I kept admiring it’s appearance. The road started to clear up ahead but I also spotted another cloud field way ahead. Or so I thought. Getting closer I could smell it and I soon found out that it was a controlled burn, so bad, I never seen one so thick of smoke and it nearly sent me into a panic gasping for air. I had to talk myself through it, calming myself and luckily the air quality slowly but surely got better. How the heck did I ever smoked for so many years. Nowadays I struggled to tolerate smoke and it felt as if I was choking for air whenever I was around a smoker.

Another wall of clouds was lying ahead and I was relieved to find out that it was exactly that. Clouds and thank goodness no more smoke. In Quincy, we turned left towards Bucks Lake and shortly after passed a man on a tiny moped. It really was way too small for him but the thing even funnier than that was the metal basked on the back of the moped and the rubber chicken that was secured to it, now staring me in the face. Over the years, we had too many moments like these to count, always making them result in a funny memory. Funny, unusual things that may be dumb to some people, but if you are easily amused and you have a good sense of humor, well you get the picture. You kind of live for these moments and yep it’s just like being a bunch of big kids.

Shortly after the human meets chicken encounter we reached our turnoff to leave civilization behind and climb three miles into our mountain lake paradise. As the dirt road climbed through the forest, I finally found my fall color. Yellow, orange and red leaved trees were competing in the morning sun giving the forest a magical glow. Here and there a few sun rays would find their way through the thick leaf cover to shine their light like a flashlight onto the forest road. “The destination is the journey” I thought to myself. Another thing I had read and something that has always been close to my heart even before I came across this saying. I was about to hike my first few steps and I had been in the car for approximately 1 1/2 hours. Yet the adventure had long begun and started with the first mile of driving. 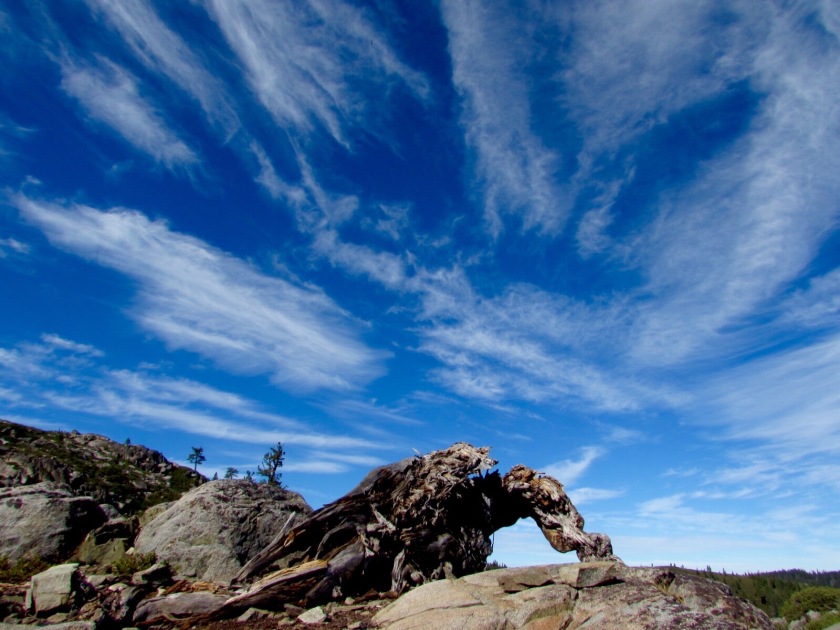 We arrived at Silver Lake and the trail greeted me with all of its magic. It was time to pay homage with my own greeting and my own magic and I put them on. I brought my own magic from Disneyland, my Mickey ears and in a way this single day became my October getaway. With the ears securely sitting on top of my head, no other human came in contact with this human mouse wandering through the woods. The trail climbed steeply up a ridge where it would level out and become more gradual. Turning around to look back at Silver Lake, now lying beneath me, I saw snow covered Lassen Peak in the distance barely peaking over the tree line. It looked so close, almost within reach due to the sheer size of it, but I knew it was a ways away and it was a nice bonus to catch glimpse from afar. The trail was fairly smooth, gradual, solid dirt, partially covered with pine needles which gave it little extra cushion for a padded feel. Soon it got rocky and harder to maneuver, which also makes it harder on the feet. There was a storm brewing further north that my bones could forecast in the pressure changes. Today would be one of those days I’d come to rely on my wooden staff for balance just a little more. The aching pains in the feet can make me feel clumsy when dealing with weather conditions and unfortunately not all hiking days are created equal for me.

Soon we reached Gold Lake, another lake lying in a granite alpine bowl. This would be our end destination for the day and a place to stay for awhile. Getting off trail we found a sunny spot high above the lake that offered stunning views and a round soft padded ground spot just in front of a huge pine tree that was pretty to look at but wouldn’t steal our sunshine. We had worked up an appetite and ate our subs and of course more trail magic….cookies while admiring the lake below. It was warm enough to sun bath and perhaps work on that base tan with no tan lines (an ongoing joke) for one of the last times for this year. The sun felt good and it was very soothing to watch the big tree slightly swaying back and forth in the breeze. From time to time a bird came to visit it and you could watch a squirrel in the distance and that was really it. Nothing more….bliss. And how could any day be complete without the magic of a little nap in a place like this. Nature and “Trail magic” at its best. ❤️

Who am I, and why I write. I’m a dreamer, but I’m not the only one. I am the one, holding on to the silver lining when the skies are gray. I’m a believer that nothing is coincidence, but that everything has purpose. I’ve made my mistakes, don’t we all, but I see them as growing pains and they are a part of who I am today. I have lost myself in order to find myself, and I still do from time to time, but in a good way. I’m a big child who laughs until my belly hurts when life wants to be serious. Career wise: I’ve been there, done that, and I took “The jump” off the hamster wheel in an effort to change my future. I didn’t land all that soft, but I can say that I’m still proud to have found the courage to do it. Coming full circle, I had it all, and yet I was lonely and had nothing. Today I choose to be a collector of moments and I chase memories, instead of the material stuff. Less is more, and the motto is quality over quantity. You’d be amazed at how freeing it can be. I see myself as a free spirit that believes in an unconventional lifestyle. Somehow I go against the grain most of the times, not to rebel, but because it feels right to stay true to my unique and authentic self. It takes courage, and you often stand alone, but if you dare, you soon realize that it is the only way if you don’t want to lose who you are. Just like most, my past wasn’t easy and I come from a life that didn’t always give me the opportunity to be heard. Few related and even fewer cared to take the time. But that’s the past and it’s history, the future hasn’t happened and the “NOW” is truly all we ever have. In the end we all have a story to tell, and we all seek to be understood. We all yearn to be heard and accepted and still life is hard and our path is full of stumbling blocks. If we can see the lessons in adversity we may realize that the toughest moments are often our greatest teachers. There is a reason for the saying that the stars can’t shine without darkness, and it might be darkness that will show you the light. It took a series of (un)fortunate events, to learn to glow through the pain, to learn how to dance in the rain. I believe in Magic and wonder, and the pot of gold at the end of the rainbow. As an empath this old soul often feels a little too much, but I wouldn’t have it any other way. Today, I am here to tell my story because I believe that it can help others. It is my hope to bring inspiration and strengths to you, while showing you that it can be done. I know you are out there, and I know you are suffering in silence. I am here to tell you that you are not alone, and your voice is being heard loud and clear. Hang on and be strong, transformation is yours.  In light and love....Rhapsody Bohème 💙🦋 View All Posts